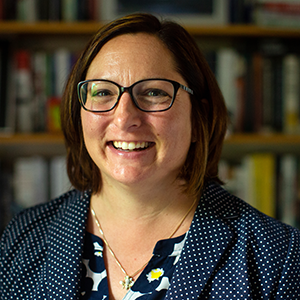 I am Associate Professor and Chair of History at Rochester Institute of Technology, where I am also a faculty affiliate in the Digital Humanities and Social Sciences, Museum Studies, and Women’s and Gender Studies Programs. My book, Mobilizing New York: AIDS, Antipoverty, and Feminist Activism, examines the history and legacy of three path-breaking social movements in New York City from the 1950s through the 1990s. I conducted more than fifty oral history interviews while researching this book; I also draw on organizational and personal archives, newspapers, films, posters, and photographs to bring these stories of activism to life.

Researching Mobilizing New York led me to co-curate “Whose Streets?: Our Streets!”: New York City, 1980-2000, a multimedia exhibition featuring the work of thirty-seven independent photojournalists who captured ordinary New Yorkers as they rallied, rioted, marched, and demonstrated. These powerful images document historic moments of violent confrontation such as the Tompkins Square Park and Crown Heights Riots and as well as organized protests involving non-violent civil disobedience and creative street theater. Collectively, these photographs, which had never before been exhibited together, chronicle New York’s history from 1980-2000. “Whose Streets? Our Streets” opened at the Bronx Documentary Center in January 2017 and was exhibited at the William Harris Gallery at RIT from October 11 - November 2, 2018 and at Gallery Q at the Out Alliance in downtown Rochester from October 5-October 25, 2018. Selections from "Whose Streets? Our Streets" was on view at Lane Hall Gallery at the University of Michigan fall semester 2019. An exhibition catalog is available for purchase from the RIT Press and the exhibition is available to travel.

With my RIT colleagues Christine Kray and Hinda Mandell, I co-edited Nasty Women and Bad Hombres: Gender and Race in the 2016 US Presidential Election, published in October 2018 by the University of Rochester Press in the Gender and Race in American History series.

Currently, I am beginning a new major research project on the history of Kodak and the greater Rochester community in the twentieth century. My research interests include modern U.S. history, women’s and gender history, public history, and digital humanities. At RIT, I teach courses in U.S. History Since 1945; U.S. Women's and Gender History; The History of the Family in the U.S.; Oral History; Ethics in the Digital Age; and Research Methods. I train undergraduate students to conduct oral history and archival research for digital and public history projects, including TransRochester Speaks, winner of the 2016 Joan Nestle Prize for best undergraduate work from the Committee on Lesbian, Gay, Bisexual, & Transgender History, and Monroe County Family Farms, which received a New York State Humanities Council Director's grant. I am happy to give talks to both academic and general public audiences, and to consult with journalists and documentary filmmakers.